Greetings one and all!

I wanted to fill you in on the goodness of our God.

As you know, we have now been over six weeks without our van. We have had some friends who have graciously loaned us vehicles to use – Rich and Lori Barcelona as well as the Harvest Vision Ministry. Thanks to you all so much.

We have been faced with many decisions. Should we fix the van? If so, do we buy a rebuilt motor ($1600 or better)? Or do we try to find a used motor ($250-$1200)? Some used motors only come with a 20 day warranty. Should we scrap the van and just buy a smaller car with better gas mileage that we can pull behind the RV (called a dinghy or TOAD)? But then how do we haul all the people and stuff?

Anyway, we wrestled with all this, praying and asking you all to join us in prayer.

About two weeks ago, a friend from here in told us about a ministry at a local church that helped folks find cars. Well, I called over and chatted with the pastor whose name was John. He said that they didn’t have any vehicles at the moment but wanted to know more about the van motor. He said he wanted to check a few things and he would call me back.

He did call me back and said that he had found a used 1998 motor with 80,000 miles (half what we had on the van) with a 1 year warranty for $950 and asked if I was interested. I said that I was but could I call him the next day with a decision. That was a Wednesday! Thursday, Erica had planned a board meeting and we had arranged to borrow a truck to go to . The truck only held 4 but there are 5 of us at the moment. I tossed and turned most of the night trying to figure out the best arrangement for traveling the next day.

Should Erica and I just go by ourselves, leaving the kids with Dave, our intern from ? But then the kids would miss out on the Yuma County Fair – the one chance they have to ride some amusement type rides. But if we do take the kids, that leaves Dave in all day, by himself. I didn’t want to do that to him, either. Adding to that, we wanted to stop by the food bank for food for the family as well as Ricardo and the guys at Eliacim, the rehab center we are supporting.

Just before morning, it dawned on me that we should just take the RV. Though it uses a lot of gas it allows for everything – everyone can go; we can get food and have a place to store it. We can take the kids and Dave to the fair and Erica gets to her meeting. Now, we don’t know if it was the enemy hassling or God guiding but when we went to get in the truck, it wouldn’t start. The fuel pump had died over night! So we ended up setting sail in the motorhome for !

All that to say this, after dropping Erica off at her meeting, we went to our mailbox and discovered checks that totaled exactly $950!!!! Taking that as confirmation, I ordered the motor and it should be finished in the next few days. Through the kindness of two pastors, the money also came in to cover the mechanics fees for changing the motors out!

God is faithful and kind. If we will just rest and wait, He will take care!

Thanks to all of you for praying and investing in us!

Another testimony of gratitude, when I was an infant, my parents bought me a $1000 life insurance policy. A couple of years ago, they discovered the policy had not been cashed in. Mom sent me the info and we received about $2000 which we were grateful for while we were here in . Well, we had been praying, even before the van troubles for that dinghy I mentioned earlier not only to have when we traveled but it would give Erica a little more freedom as well. For instance, on Fridays when I go up to the food bank, she and the kids could leave at a leisurely for Park Day with the homeschoolers rather than the that I do.

Anyhow, we were looking and praying. The other day, I get a call from my parents saying that they were notified that some of the money from that $1000 insurance policy had been converted to stock in the Prudential company and that I was a shareholder in Prudential. Imagine that!?! I called and discovered that I indeed owned stock – 34 shares to be exact at the current price of over $91 per share for a total of over $3000!!!! Which just happened to be the amount we were thinking we needed to try to find a nice used car. So now we are in the market for that dinghy and would appreciate your standing with us. We know the Father has precisely what we need out there, we just need to be diligent and patient!

Thanks again to you all.

Take the adventure that Aslan sends you!

Posted by missionaryman at 1:09 PM No comments: Links to this post

He rose as He said! 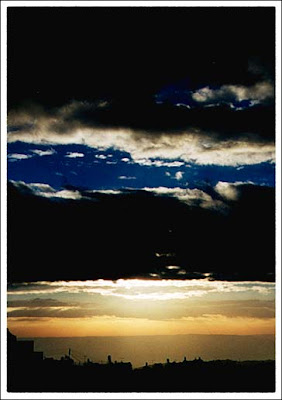 "We are going up to Jerusalem, and everything that is written by the prophets about the Son of Man will be fulfilled. He will be handed over to the Gentiles. They will mock him, insult him, spit on him, flog him and kill him. On the third day he will rise again." - Jesus
Luke 18:31-33 NIV
Posted by missionaryman at 8:16 AM No comments: Links to this post