Pray for Mexico and its national elections this year!

– A faith healer known as the Black Wolf brushed basil plants over the face of 's front running presidential candidate on Sunday to protect him against his enemies. 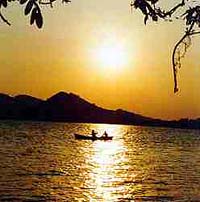 The leftist Andres Manuel Lopez Obrador went through the so-called “cleansing” ritual while campaigning in the southern Mexican town of , which is a famous center of faith healers and alternative spirituality.

“I'm defending a just cause that gives me great spiritual and moral strength. This is no more than a cleansing to protect me against any circumstances,” Lopez Obrador said in front of a rally of about 5,000 supporters, who were mostly peasant farmers.

Many Mexican artists and intellectuals go to Catemaco in March to receive cleansings from faith healers such as the Black Wolf, whose real name is Lucio Escobar.

Lopez Obrador, who is the favorite to win the July election according to most opinion polls, has accused his political enemies of plotting to destroy him.

On Sunday, he said his adversaries will not defeat him.

“Nothing will happen to me because good always triumphs over evil,” he said.

-Click on the header to read the entire article.-

Obrador has been the front runner for president of Mexico. The "faith healer", Black Wolf, is in the city of Catemaco, known for its "Annual Gathering of Witches", is where this presidential candidate went for a so-called "cleansing" ritual. It is known as the witchcraft capitol of the world! As the leadership goes, so goes the country! Pray for Mexico, its people as they vote and its leaders! - Joe

Posted by missionaryman at 6:14 PM No comments: Links to this post

In the , an influx of Mexicans is transforming Roman Catholic churches. But in , it's Protestants who are on the rise, led by evangelical churches like the Universal Kingdom of God Church, which runs the Sanctuary of Faith.

Protestants accounted for 8 percent of 's believers in the 2000 census, up from 2.3 percent in 1970. Their numbers are growing 3.7 percent each year, twice as fast as the Catholic population, according to the National Institute of Statistics, Geography and Information Processing.

The churches are winning converts through a mix of social programs, charismatic preachers and stirring music.

Posted by missionaryman at 8:34 AM No comments: Links to this post 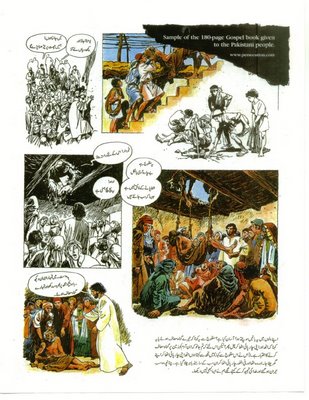 Cody and Alissa participated in a program from "Voice of the Martyrs" to send Christmas Care packages to the children of men and women who had been killed for their beliefs in Nigeria. Since 1999, more than 10,000 Christians have been martyred in that country.

VOM readers funded more than 11,000 Christams Care Packs for the Nigerian families. Nearly $600,000 was donated for this outreach that touched many widows and fatherlss children.

To the right is a sample of a 180-page Gospel book distributed to Pakistani people. Click on the picture to see it larger.
Posted by missionaryman at 11:30 AM No comments: Links to this post