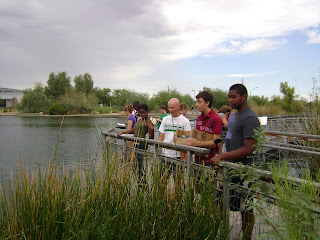 Our first field trip with the Biology class was to the Riparian Preserve in Gilbert.  We needed to collect some pond water to grow different microorganisms in and there are not a lot of natural ponds and/or lakes around here.  So when several moms told me about the Riparian Preserve, I went to check it out.  It is really beautiful and educational.  There is a main lake where you can actually fish.  And we saw many ducks and a turtle in the water.  The Riparian Preserve is a place where they reclaim groundwater and pass it through several different marsh-like bodies of water in order to clean it.  Then it is used for all different purposes.  We also saw a great blue heron and many white egrets, as we explored the area.

The kids seemed to have a good time, as they found a pool of water with some fish left in it.  They caught 2 of them and decided to return them to the lake.  Not sure if they both made it into the water, but.... 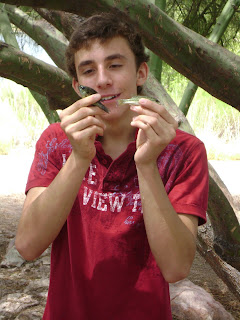 We did collect the water we needed for the experiments that we will be doing this coming Friday and the kids seemed to enjoy the time.  The weather was perfect - cloudy with a nice breeze - very odd for the middle of August. 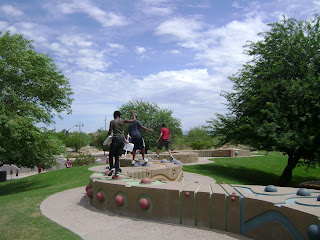 We are also talking about going to the Botanical Gardens when we are studying the Plant Kingdom, and Biosphere 2 during our holiday break.  So far, this Biology Co-op is going well and we all seem to be enjoying it.
Posted by dolphin lady at 8:00 AM No comments: Links to this post 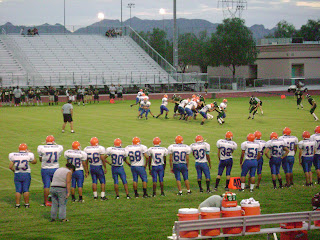 Football season has officially begun in the Burgan home!  This last week was Cody's first football game of the season playing JV football.  He started as center, and also played alot of defensive line (which is what he prefers).

Now, he has been practicing and doing weight camp almost every day since early April.  But now the games have begun!  It is very exciting to see him doing what he loves, and doing it quite well!  He has a game almost every week for the next two months.  I am helping to feed the boys each week before their games and my hubby is going to be video taping all the games.  We definitely like to be involved in helping with things that our kids are doing:-)

And I KNOW that we will be watching ALOT of football games on TV, too, as the NFL and college season get underway.  So.....football season, here we come!!
Posted by dolphin lady at 5:20 PM No comments: Links to this post

This is NOT your average homeschool planner!
This is a
LIFE PLANNER
for
HOMESCHOOLERS!!
To read more, click here!
Posted by dolphin lady at 1:02 PM 1 comment: Links to this post

Several days ago, I was craving cupcakes.  Ok, if you know me very well, then you know that I don't even particularly LIKE cupcakes, or any cakes for that matter.  However, I have been watching some episodes of Cupcake Wars on TV, so maybe that caused this unexplicable craving for cupcakes.  As I thought about making cupcakes, I decided I really wanted carrot cake cupcakes with cream cheese frosting.  So I looked up a recipe on Allrecipes.com and found one for Maple Carrot Cupcakes, which sounded a little like something you might see on Cupcake Wars.

They were quite simple and quick to make and since there wasn't a ton of sugar, that made me feel better.  The icing was a little strange in that it had NO sugar in it - I have never seen icing without powdered suger!  It used maple syrup as the sweetener, along with butter, cream cheese and vanilla.

Well, the cake portion got rave reviews, but the icing got mixed reviews.  I liked the icing and most of my family did, but my son HATED it!  He said it was the most disgusting icing he had ever tasted and made me take it off his cupcakes (so I left some un-iced for him).  However, it makes a nice combination, in my opinion.  However, next time I will probably make my normal cream cheese frosting and leave it at that.

Oh, I would show you a pic except that someone tilted the cupcake holder on its end and all the cupcakes are messed up now:-)  Thankfully, they still taste good!
Posted by dolphin lady at 12:34 PM 3 comments: Links to this post