Homeschoolers in the News

It is right , appropriate and necessary to balance the scale of press coverage of two young men recently in the news who were both homeschooled.

(AP) - Tim Tebow took a few deep breaths, steadied himself, then plowed through his Heisman Trophy acceptance speech much the same way he takes on tacklers - fast and furious.

In rapid fire, 's sophomore quarterback thanked everyone he could think of, some of them twice. When it came time to take hold of the 25-pound bronze statue, he looked as if he wasn't sure whether he should run with the prize or throw it. He does both so well.

's folk-hero quarterback with the rugged running style and magnetic personality became the first sophomore to win the Heisman on Saturday night. 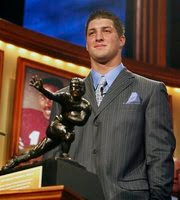 "I am fortunate, fortunate for a lot of things," Tebow said. "God truly blessed me and this just adds on. It's an honor. I'm so happy to be here."

Since 1935, when Jay Berwanger of won the first Heisman, every winner had been a junior or senior - until Tebow, who picked up quite a souvenir on his first trip to .

"It's surreal a little bit," he said. "It's just overwhelming."

Homeschooled by missionary parents who run an orphanage in the , Tebow took advantage of a state law to play for Nease, about 90 miles from the campus.

Tebow has worked and preached at his parents' orphanage since he was 15. He regularly speaks at schools and delivered his message of faith at a prison in earlier this year.

And then the other -

COLORADO SPRINGS, Colo. — The gunman believed to have killed four people in a pair of shooting sprees at a megachurch in Colorado Springs and a missionary training school near Denver had been thrown out of the missionary school a few years ago and had been sending it hate mail, police said in court papers Monday.

The gunman was identified as Matthew Murray, 24, who was home-schooled in what a friend said was a deeply religious Christian household. 's father is a neurologist and a leading multiple-sclerosis researcher.

Posted by missionaryman at 11:45 AM