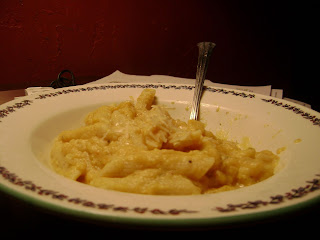 I have been reading recipes and contemplating making this dish for a couple months - since the beginning of the "pumpkin" season.  So tonight, I was hungry for some pasta and had some of the fresh pumpkin puree in my fridge.  I decided to give it a try.  My daughter was not so optimistic.

However, it was really easy to make and tastes delicious!  Here is the recipe I began with, however, I tweaked it a little by adding a little more hot sauce to taste and some extra seasonings that I felt it needed as I tasted it along the way: