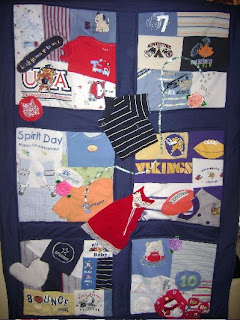 Just before Christmas, I completed this project of a baby memory quilt for a friend of a friend. It was my first time to piece something like this together and was quite a project! I received a box of baby clothes - mostly boys because the girl in the family was a bit older and they hadn't kept as many of her clothes. So it was a challenge to make it look balanced, as well as highlighting the few girls clothes.

I am not sure how many hours this took, but at least 20 hours over about a weeks time. It sort of came together as I went - the hardest part was the first cut into each cute baby outfit!! It was SO hard to start:-), but as I went along it got easier and a plan came together with the six blocks. I chose navy for the borders since there was so much blue and hand-stitched some of the special things on top after putting it together.

All in all, I was very pleased with the results and I believe the recipient was pleased also. It is a great way to keep some of those baby memories around without keeping a bunch of boxes of baby clothes that you only pull out once in a while to look at. And no one else appreciates them like you do, but this quilt is adorable to all your friends, as well as a great conversation piece.

I have had some requests to do more of these in the future and I believe it was worth my while, so I will let you know when I do another one. Let me know how you think it came out. I am also open to any suggestions that might make the next one easier.

I love this! I would like one. Do you have a business?

Sort of a casual business. Please feel free to email me directly so we can discuss in more detail.
dolphinplus@juno.com

Curious-Did you use a machine to do the squares or by hand? I have been saving some of my boys clothes (mostly t-shirts) to do a similar project and would love to get started but I don't sew with a machine. I was thinking of lightly quilting the designs on the tshirts. Do you think it will work?

Great job.!! I love your baby memory quilt project complete. How much baby clothes you used in this project.!!

What a wonderful quilt - you did a fabulous job!