A Day of Challenges

Today was a day of challenges for the group from Southwinds. It began late last night when the toilet got stopped up and our 25 ft. plumbing snake couldn't clear it out. The phone number for the plumber we know is no longer in service. No one we know knew of a plumber we could call. We emptied out the sewage tanks on the trailers, but one was out of water, so we couldn't even use that one. So, first thing this morning, we went to the water company to get them out with a truck to fill the RV tanks, tried to find a plumber (with no success) and dug up the sewer pipe from the outside bathroom to find that it made several very sharp turns which is why it clogged. 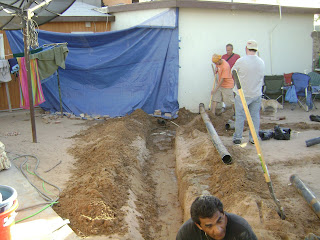 We never got in touch with a plumber, but the team decided to dig up the sewer line and lay it in another way to eliminate two of the sharp turns. So after a long day of work over at Hope House, they came back and dug up the line, laid the new pipe and buried it again. The water truck didn't show up until almost noon and his pump kept overheating. Eventually, we got the tank filled up with water. 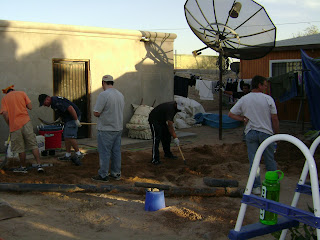 This evening, we served a typical meal that a poor family here in San Luis would probably eat - beans, rice and tortillas. The students seemed to enjoy it and no one complained! They used no utensils - just tortillas. 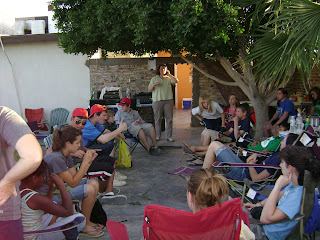 Tonight, we rigged up a LCD projector and they are watching a movie outside on the back wall of the house. Some of them went down to the park to watch the Mexicans play fon tennis (sort of like racquetball). Everyone is pitching in and doing their part. Attitudes are overall good, but I think some of them are being challenged in what they are experiencing culturally. 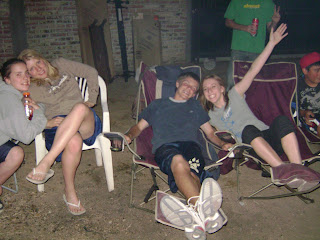 There were a few kids who battled a little dehydration today (they slacked off on drinking sufficient water), but they all feel better now. We "forced" them to drink 2 quarts of water straight down and very shortly they began to feel better. It is really the desert here and the humidity hovers around 12-15 %, so you seldom even know you are sweating - it just evaporates. And the temperatures have been in the mid-90s each day, so it is critical that they stay hydrated - that means drinking over a gallon of water each day. 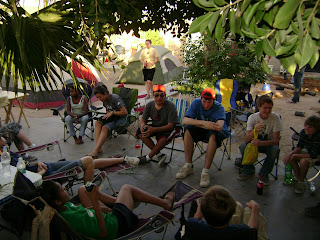 Stay tuned for more updates tomorrow and, of course, more photos of the gang from Southwinds. I will post some photos of the work that has been completed at Hope House, too. 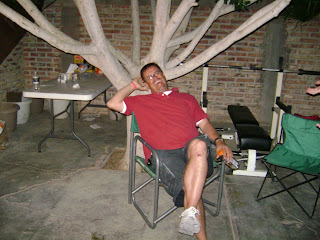 Oh yeah - Bob has been working VERY hard! Well, he keeps us laughing - definitely the comic relief of the week!
Posted by dolphin lady at 7:58 PM